It has been 8 years now since I started to make the transition from a professional chess player to a chess coach. A good choice, since teaching has not only given me financial security but I also like to follow the progress of my students with great interest. Several of them now have international titles and I continue to check their games. But unfortunately, there is a minor downside, as giving lessons and preparing for them has lessened my motivation to work on my own game. There simply is no more energy left after 4 lessons on a day to do some opening study, let alone doing some necessary hard work on calculation!

My results have steadily declined since 2013 and where I used to be rated between 2570 and 2606 for many years, lately the dreadful prospect of dropping beneath 2500 became dangerously realistic. Of course, I have had some good results in the last couple of years as well: I almost won the Dutch championships in 2017 and in 2018 I had the best tie-break in the Limburg open, but overall the trend has been going downward.

In Hoogeveen, for some mysterious reason, all went extremely well for me although the start was not so special. In round 1 I only managed to win my game after the time control against the talented 12-year old Machteld van Foreest.

In the second round, I was never better with black in a strange sideline of the Ruy Lopez against Eelke de Boer, a student of mine.
Both of us didn’t make any mistakes so a draw was fine.

The next day was scheduled with two rounds. Such days can either make or break your tournament.
It is very exhaustive to play two long games a day, especially if you are not ‘young’ anymore which sadly enough is the case for me. Nevertheless, I made two points.

In round four I was paired with a dangerous up-and-coming player from Norway, Tor Fredik Kaassen.
Kaassen somewhat surprisingly managed to dominate the European U18 championships in Bratislava earlier this year where he was stopped only in the last round to finish with a well deserved 3rd place.
Our game was interesting but somewhere around move 30, I was handed the initiative which led to a rook endgame in which I was two pawns up. The position still might have been drawn but in the end, I managed to convert my material advantage.

Then in the fifth round another big test. In my previous two games, I had played black against Casper Schoppen and he managed to beat me convincingly in the Groningen Open last year…

White is controlling the c-file and the pawn on b5 is a potential target.
White would like to use the c-file to infiltrate the black position on the 7th or 8th rank but black seems to have enough resources to defend the key squares after 23.Qc6.

My engine wants to build up the position with 23.Rab1 followed by Bf1 and this looks also good, but I think the move that I played in the game is the strongest.

This way white can make use of the c-file in the most optimal way. The bishop on c8 was an important defender that needed to be eliminated. The rooks are now able to attack black’s position from the inside. Once the e6-pawn falls black’s whole position collapses. 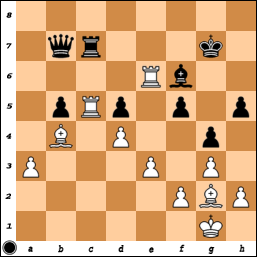 A wonderful outpost for the Rook! If black takes it then white will get a very strong passed pawn. (1-0, 37)

In round six I was in some trouble against 13-year-old Uzbek chess prodigy Javokhir Sindarov.

My last move was 28…R8b4. Time trouble is lurking around the corner for both of us.
How would you evaluate this position? Yes, black’s pieces look active but the most important factor in this position is the weakened black king.

Objectively not the best but the line after 29…Rxa4 30.Rxe7+ Kf8 31.Rxa4 sure looks scary for black!
I decided it was not the kind of position that I wanted to defend in time trouble and chose a much worse move instead.
White could also create problems with 29.Qa7!?, defending f2 and threatening Rxc7.

The final position in our game looked as follows:

It looks like Black is winning but unfortunately, this position, ladies and gentlemen, is just a fortress. It might seem I gave a draw too early, but I just didn’t see any chances for White to go wrong here!

Now the tournament system in Hoogeveen is a bit unusual. The top four of the rankings after seven rounds qualify for a K.O. tournament. The pairings: 1-4, 2-3 and the winner of each leg meet each other in the final. The losers play for third place in the ‘small final’.

Since  I finished second I was rewarded with a white against my friend Jan Werle. The Catalan opening came on the board and it seems I was much better prepared for the sideline that occurred. After 30 moves I got a technically winning position which I converted despite tenacious defense by Jan.

Therefore I qualified for the final in which I would be black against Sindarov once again. Sindarov had won in the other semi-final against the surprise of the tournament, Viktoriia Kirchei, a 14-year old girl from Russia.

When I was in Bratislava as a coach for the European Junior championships I thought she played a really good game as black against Dutch representive Eline Roebers. At that moment she looked underrated at 1950 but still, it was impossible to predict she was capable of a performance like the one she pulled off in Hoogeveen. With simply healthy moves she managed to beat a couple of strong IM’s and even in her game against Sindarov she missed a chance to win the game. This girl definitely has a bright feature in chess!

The final I won, although I misplayed the opening a bit.

It has been a while since I played such interesting games and with good results to boot! Next stop: the Groningen Chess Festival, starting on the 21st of December. But probably I will write some more posts when I have time.